www.mbsm.pro , We Love you Mohamed Ali

Celebrities, politicians and fans of Muhammad Ali have come together in the boxing legend’s hometown of Louisville for a two-day farewell to the four-time world heavyweight champion, known as « The Greatest, » who died on June 3 at age 74.

A well-wisher holding a banner touches the hearse carrying the remains of Muhammad Ali during the funeral procession for the three-time heavyweight boxing champion in Louisville, Kentucky, June 10, 2016. 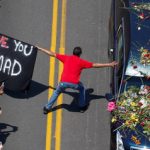 Powered by Mbsm Dot Pro and Theme created By MBSMGROUP